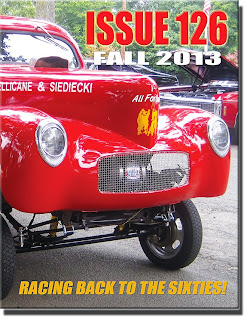 ISSUE 126, FALL 2013, is IN THE MAIL!
Thanks to the superb photography of Bob Wenzelburger and the photojournalist skills of Ron Updike and Charles Whetstone, you'll soon be standing at your mailbox and reading another great issue. Features in this include:
The terrific cover photo is by Marc Augustine

Posted by ERNEST at 1:56 PM No comments: